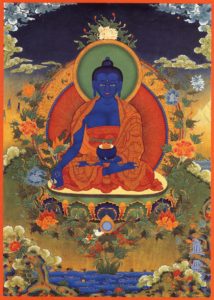 Buddhism in general, and Vajrayana in particular, believe that through the three factors of mantra, symbolic gesture known as mudra (hand position) and meditative absorption one can actualize the true accomplishment of Buddha-hood.

Mantra is the recitation, verbalization of the essence words of the practiced rituals of the Deities.

Mantra is the essence of prayer that assures the receptiveness of the respective Enlightened Deities, and the request and means through which one invokes the Deities.
It is the common language and bridge between you and the Deities.
Mantra is the memorable slogan you chant to have your request heard and answered by your Savior Deity. Thus, chanting mantra is having the same meaning as reciting whole texts or treatises of teachings relating to your Savior Deity. Reciting such mantras will assuredly bring the blessings of the Deities more swiftly to your life and the lives of your loved ones.

Mantra indeed contains hidden key codes that will activate your DNA bringing you to a higher consciousness and potential.

“Man” in Sanskrit means mind, and “tra” means to protect. Separated into these two segments, it reveals the inner meaning of salvaging one’s mind from conceptualization, concept and fear.

Melody in general has an inherent ability to sooth the disturbed mind, and neither sees separation in the mind of its listener nor does it create any geographical or racial boundary. Melody is the only language which can please the ears of both Divine Beings, humans, animals and other living Beings. It is the softest and most modest way to put forward a demand to anyone, be they of a domestic, social, political, economic, Spiritual or temporal nature.

Long ago, Divine Beings created volumes or melodies, to suit people of different mental dispositions. Melody travels faster than just spoken words, and leaves a stronger impact in the mind of the listener than eloquently pronounced words. Adding mantra and prayers to melody creates a holy vehicle through which an ongoing connection to the Deities is assured.

It is believed that chanting prayers in melody and singing mantras in tune originated at the time of the Enlightened Buddha, when disciples requested the Buddha to turn the wheel of Dharma by singing their requests. There was once a much celebrated monk and disciple of the Buddha whose melodious voice was requested time and again by his compatriots in asking the Buddha to teach.

In a similar way, the famous symbol of the Dharma Wheel flanked by a pair of buck and doe that adorns the roots of all places of Buddhist worship, recalls the fact that as the Buddha began his first teaching – The Four Noble Truths – all the animals were drawn to listen to his melodious voice.

Thus, melody has always had a crucial role in Buddhism, be it to implore the Buddha to teach, or to invoke the enlightened Deities to listen to our pleas and shower upon us their blessings, or to inspire to follow the path shown by the Buddha.

One of the main benefits of chanting prayer in melody is that regardless of what belief or faith one adheres to, one will always be moved to listen to the message if it is carried by a melodious tune. This is because music is the only language that anyone can understand, even one who is illiterate. Therefore, in Buddhist Sutric and Tantric treatises, different types of melodies are recommended to invoke the Enlightened Deities depending on what types of blessings and benefits you are seeking.

So marvelous are the great benefits of applying melody to the recitation of mantra that such practice has continued for more than 2.500 years.

Remember, Mantra is the essence of prayer that assures the receptiveness of the respective Enlightened Deities, and the request and means through which one invokes the Deities. It is a common language and the bridge between you and the Deities, a bridge between this world of yours and the higher worlds of the Deities. By reciting a Mantra, you call upon the respective Deity to help you. It is a request that will be heard and answered by your Savior Deity. Reciting Mantras will assuredly bring the blessings of the Deities more swiftly to your life and the lives of your beloved ones.

If you tend to print out the images and texts on this page (excerpt from Omahara/Melchizedek) please bear in mind that it is indeed powerful energies, and treat those things with the greatest respect and for your own good. There are some very powerful aspects represented here which I am guided to include as we are all to be ready to face those at this end of time cycle.

I recommend to hang up Buddha images above your eyesight, as those are aspects of yourself and must be honored. Best placement is so the Buddha can oversee the entire place, who is coming and going and facing east. Do not sit or step on either the images or the texts. Also do not place any Buddha in kitchen or toilet/bathroom as this will flush out the wisdom because of the function of those rooms.

Complete card set can be found in the Shop!